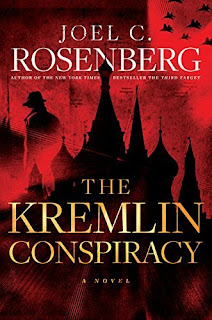 Everything he learned to protect the president, he must use to take out theirs.

With an American president distracted by growing tensions in North Korea and Iran, an ominous new threat is emerging in Moscow. A czar is rising in the Kremlin, a Russian president feverishly consolidating power, silencing his opposition, and plotting a brazen and lightning-fast military strike that could rupture the NATO alliance and bring Washington and Moscow to the brink of nuclear war. But in his blind spot is the former U.S. Secret Service agent, Marcus Ryker, trained to protect but ready to kill to save his country.

I've never read a Joel Rosenberg book before, but I've heard so many great things about them that I'm excited to give them a try. He seems to be scarily good at predicting the future of world events.

What book are you eagerly anticipating? Leave a comment below and let me know.