Review: Songs in the Night (The Song Giver #1) by Laura Frances 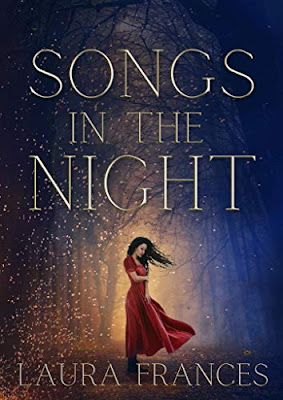 About the Book
From the author of The Slave Series...

Book one in a series of short novels...

What would they do if I screamed…if the force of my voice ripped these walls to shreds?

Thirteen years have passed since five-year-old Eris crossed the border into Omaria, finding shelter among a wary band of drifters. But Sithian slaves are branded like cattle, and the scars across her palms serve only to alienate her from the people she once trusted for protection.

After word reaches the forest of a violent Sithian attack in the northern regions, and fearful rumors of sorcery hum on the air, Eris is blamed when a night of violent sickness sweeps through camp.

Forced to flee for her life into unfamiliar land, Eris once again finds herself at the mercy of cruel men. Captured by traders and imprisoned in a cage, she determines to do whatever it takes to protect a fragile, sick woman chained to the bars.

But as they draw close to the border and hope of escape fades, a frightening power rises within Eris, fueled by the bitter grief warring in her heart. The scars across her palms burn, and Eris fears she may be becoming the very thing the king’s knights vow to destroy: a diavok cursed for evil.
Amazon / Goodreads
Available in Kindle Unlimited
MY THOUGHTS
I absolutely loved this book! The writing was so beautiful and descriptive. The story came to life. I was right there with these characters, not just an observer, but feeling everything they did. I love it when an author can completely submerse me in a story like that. It's a rare talent, and this author has it.

Eris was such an endearing character. I really felt for her. She'd been through so much hardship. Always an outsider, she never fit in and was always looked down upon. It was truly heartbreaking, the horrendous way she was treated. She had a ton of fight, and a lot of spirit, though. She never gave up, and I admired her so much for that.

This was set in a brutal world full of many evils. It touched upon some heavy subjects with grace, shining a light on the brutality of these atrocities without being graphic.

I'm curious to see where things go in the next installment. I'm eager to continue this journey with Eris and Etan. The next book can't come out soon enough. I'll definitely be checking out this author's previous work in the meantime.
FIVE STARS
Posted by Ashley Sapp at 12:00 AM