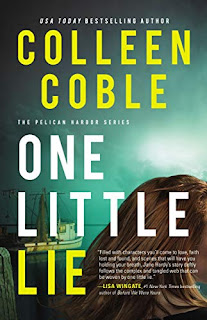 Jane finds herself depending on Reid's calm manner as he follows her around taping his documentary, and they begin working together to clear her father. But Reid has his own secrets from the past, and the gulf between them may be impossible to cross.
Amazon / Goodreads
My Thoughts
It's been way too long since I've read a Colleen Coble book and I'm so glad I dove back in with One Little Lie. It was so good! It grabbed me at the very beginning and didn't let go. Once I reached the halfway point, I could not put it down and finished it in one afternoon. The mystery was superb and had me stumped until right before the big reveal. There wasn't much romance, but I'm hoping that will change in the sequel.

Full of diverse and interesting characters, the small town of Pelican Harbor really came to life. I'm excited to visit the town again in the next book, Two Reasons to Run, and to continue the journey alongside Police Chief Jane Hardy.
4.5 Stars
Posted by Ashley Sapp at 12:00 AM