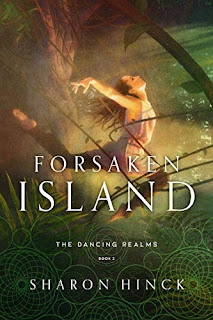 This week I'm featuring Forsaken Island (The Dancing Realms #2) by Sharon Hinck releasing September 15. The first book in this series, Hidden Current, is one of my favorites I've read this year. I was super excited when I learned the sequel was releasing so soon. I've got it preordered and am so ready to see what these characters are up to this time.

About the Book
On an uncharted world, happiness is effortless and constant ... but can true joy exist without sacrifice?

The people of Meriel have long believed their island world floats alone in the vast ocean universe, so they are astonished when another island drifts into view. With resources becoming scarce, Carya and Brantley quickly volunteer to search the new land for supplies.

After navigating a barrier of menacing trees, the pair encounter a culture of perpetually happy people who readily share their talents and their possessions. But all is not what it seems. At the core of the island is a horror that threatens everyone, including Brantley and Carya.

Freeing the villagers of the bondage they've chosen may cost Carya and Brantley more than they could have imagined. Even if the two succeed, they'll have to find a way to return to Meriel quickly ... or be cut off from their home forever.