Review: The Skill of Snooping (The Sidekick's Survival Guide #5) by Christy Barritt 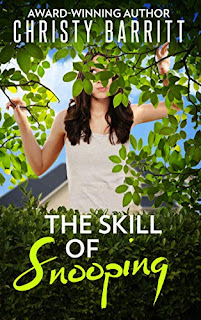 About the Book
Apprentice PI Elliot Ransom is thrust into the case of her life when Velma, her quirky friend and coworker, goes missing. Even more chilling: Elliot suspects the notorious Beltway Killer may have taken her.

The countdown to find her intensifies as the killer’s usual timeline creates a ticking bomb. To make matters even more complicated, Elliot’s partner is distracted by an unexpected guest. With Velma’s life on the line, being sidetracked isn’t an option.

Tensions continue to mount as Elliot races to find answers and save her friend. Who would have thought a little snooping could mean the difference between life and death?

The Skill of Snooping, the fifth installment of the Sidekick's Survival Guide, is the best, and most intense, one yet!

Elliot's coworker and friend Velma has disappeared and Elliot's worried that the Beltway Killer has taken her. It's a mad dash race against the clock to find her. To add even more chaos to an already stressful situation, someone from Michael's past shows up and really complicates things.

There's so much going on in this book. The suspense was off the charts! I literally couldn't read it fast enough. I had to know if everything was gonna be okay. Like I've come to expect from Barritt's books, the mystery was great and kept me guessing. I had a niggling bit of suspicion about the guilty party but pushed that aside because there were so many other viable suspects.

I'm so excited for the next book, the conclusion to this series. I can't wait to solve the mystery surrounding Elliot's dad.