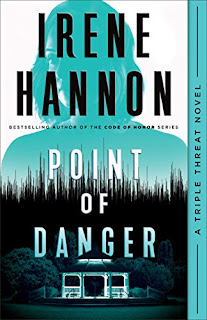 About the Book
Radio talk show host Eve Reilly is used to backlash from her pot-stirring on-air commentary and interviews, but now it seems a disgruntled listener is resorting to more than angry words to express their displeasure. When a suspicious package arrives on her doorstep, Eve turns to law enforcement for help.

Police detective Brent Lange can't find any evidence to link the string of unsettling incidents that follows, but he's convinced they're connected. As the harassment grows more menacing, it becomes clear someone wants Eve's voice silenced--permanently.

But unless he can track down her foe, fast, the gutsy woman who is willing to take risks for what she believes--and who is swiftly winning his heart--may not survive.

Bestselling author and three-time RITA Award winner Irene Hannon is back with a heart-stopping new series that will have you turning pages well into the night.