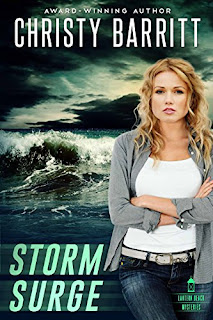 About the Book
A storm is brewing hundreds of miles away, but its effects are devastating even from afar.

Laid-back and light: that's Cassidy Livingston's new motto. But when a makeshift boat with a bloody cloth inside washes ashore near her oceanfront home, her detective instincts shift into gear . . . again.

Seeking clues isn't the only thing on her mind-romance is heating up with next-door neighbor and former Navy SEAL Ty Chambers as well. Her heart wants the love and stability she's longed for her entire life. But her hidden identity only leads to a tidal wave of turbulence.

As more answers emerge about the boat, the danger around her rises, creating a treacherous swell that threatens to reveal her past. Can Cassidy mind her own business, or will the storm surge of violence and corruption that has washed ashore on Lantern Beach leave her life in wreckage?

Storm Surge is another great addition to the Lantern Beach Mystery series. I was catapulted into this story from the very beginning and had a hard time putting it down. It's extremely fast-paced. The suspense was so intense that there were times when I could hardly catch my breath.

Even though Cassidy is supposed to 'lay low', she just can't seem to fight her investigative instincts. She's 'supposed' to be laid back and carefree, but mysteries seem to find their way to her and she can't help but get involved. She can't help but try to aid those in need.

Ty was out of commission for much of this book, so he wasn't as involved with the action in the first half. Plus someone from his past shows up unexpectedly, making things a tad awkward. But there was some development with his and Cassidy's 'relationship'.

I highly recommend this series! Can't wait to see what's in store for these characters in the next installment!