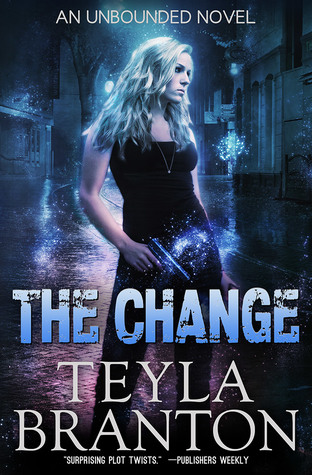 There are only two ways to kill Unbounded, and fire isn’t one of them—as law school dropout Erin Radkey learns the hard way. By fluke of a recessive gene, she has become Unbounded, a nearly immortal being with paranormal abilities.

Erin’s Change separates her from her loved ones and alters everything she believes to be true. A week earlier she was considering a marriage proposal; now she contemplates the best way to stay alive. Caught in a battle between two Unbounded groups, she is also hunted by a secret mortal society sworn to eradicate the Unbounded gene. Worse, a new identification software could mean death for all Unbounded—or enslavement for the entire mortal world.

As Erin plunges into this dangerous new life, she must carve out her own place in the madness, protect her mortal family, and decide which group she should join. Her powerful attraction to Ritter Langton, whose family was massacred by opposing Unbounded two hundred and forty years ago, complicates her choices. There are no second chances. Death, life, or love—Unbounded always play for keeps.

Non-stop action, terrifying consequences, and powerful romance make this an exciting addition to the world of urban fantasy.

Things start changing fast for Erin when she survives an unsurvivable accident. It's not long before she's dragged into the hidden world of the Unbounded where she's caught between two warring Unbounded factions and becomes a target for Hunters (a group dead set on destroying all Unbounded), all while trying to get used to the idea of her new (nearly) immortal life.

It's really hard to find good urban fantasy or paranormal books without tons of bad language or steamy scenes, so I was thrilled to find The Change. No bad language or steamy scenes-YAY! I've had this book on my Kindle for awhile and can't believe it took me so long to try it. It was awesome! I was hooked from the first sentence and it held my complete attention to the very end.

The concept of the Unbounded was unique and super interesting. The world building was great. I enjoyed learning the ins and outs of the Unbounded right alongside Erin. There were a few times when Erin acted a bit immature and I'd forget she was actually in her thirties and not a teenager. She was thoroughly likable, though. Plus, all of the secondary characters were fully-fleshed out and I loved getting to know them.

There was a ton of action and shocking twists and reveals. I never knew what would happen next! This book just kept getting better and better the further along I read. I can't wait to read book two, The Cure!