Book Beginnings + Friday 56: Written in the Dust by Christina Coryell

Book Beginnings is a weekly meme hosted by Rose City Reader that asks you to share the first sentence (or so) of the book you're reading.

Friday 56 is hosted by Freda's Voice and asks you to grab a book (any book), turn to page 56 or 56% in your ereader and share a non-spoilery sentence or two.

This week I'm featuring Written in the Dust by Christina Coryell. It just released this Tuesday and it was AMAZING! (You can check out my review for it here.) This is book two in the Backroads Series and, I didn't think it was possible, but Written in the Dust is even better than the first book. I thought I'd share the Beginning and 56 with y'all today. I really loved how this beginning echoes back to the beginning of Written in the Stars, but with a completely different feel, this time with more hope. 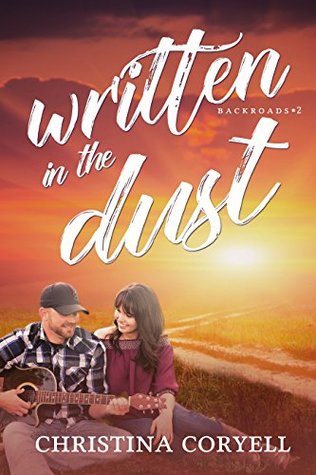 Brooke turned onto the gravel road directly behind another car, not even trying to distance herself. The cloud of orange-brown grime rolled from the tires, coming up to greet her like a gritty whirlwind of dirt. She tried to stare through the fog of earth, unable to get a clear view. Squinting behind her sunglasses, instead she focused on the blur of the dirt-smudged white car in front of her, but she didn't slow her vehicle.

Wrapping her fingers around the crank on the driver's side door, she rolled the window down, letting the dusty air penetrate the interior of the truck. She'd need a shower, but she didn't care. The warm air crept into her lungs, the orange fog swirling so thick she could taste it.

He probably wouldn't have visited the back eighty today, given his headache and the fact that he'd spent time with the cows yesterday afternoon. And if she hadn't come back, he'd have spent his day watching baseball on television and nursing his hangover. But she did come back, and having her as far away from civilization as possible could only be to his advantage. If she couldn't stalk away from him, that was even better.

There are two basic types of people you’ll come across in small towns. Planters have the land in their blood and want to stay forever. Dreamers long for the day they will finally escape. Holly Christian? Definitely a planter. She’s never considered leaving for greener pastures, but it’ll be a whole lot easier to move forward when people finally stop telling her that will never happen. Thank goodness she has an ally in Hunter Pearce. He has no desire to leave now that he has what he’s always wanted. Well…almost. The words he can’t take back are still clinging closer than a humid summer afternoon.

Then there’s Gatlin Moore, who leans more in the dreamer direction. He used to imagine a future away from his hometown, but circumstances changed his plans long ago. Now he can’t stop thinking about bringing some of his dreams back to life, namely the ones that involve Brooke Langdon. Breaking up in their small town was hard, but getting back together might prove impossible. She may not be around long, unless she rediscovers what she used to love about the place. Putting her future in order by piecing together the past could mend her heart…or break it for keeps.

Welcome to Hope Canyon. This is our backroads story.

What have you been reading lately? Leave a comment below and let me know.