Can't Wait Wednesday: Kings Falling (The Book of the Wars #2) by Ronie Kendig 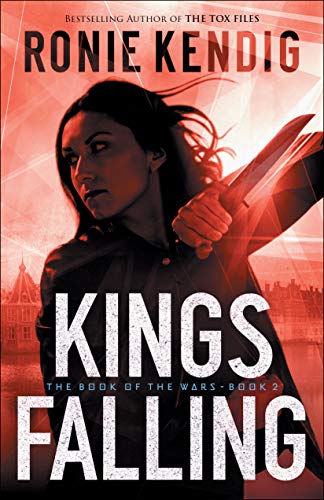 This week I'm featuring Kings Falling (The Book of the Wars #2) by Ronie Kendig releasing March 31.

About the Book
Leif Metcalfe and his team, dubbed Reaper, need to recover the stolen, ancient Book of the Wars if they hope to stop the Armageddon Coalition and their pursuit of global economic control. But their attention has been diverted by a prophecy in the book that foretells of formidable guardians who will decimate the enemies of ArC. While Iskra Todorova uses her connections in the covert underworld to hunt down the Book of the Wars, Leif and Reaper attempt to neutralize these agents but quickly find themselves outmaneuvered and outgunned.

The more Reaper tries to stop the guardians, the more failure becomes a familiar, antagonistic foe. Friendships are fractured, and the team battles to hold it together long enough to defeat ArC. But as this millennia-old conspiracy creeps closer and closer to home, the implications could tear Leif and the team apart.

Why I Need It
I've loved everything I've read by Ronie Kendig. She's a master at what she does and I can't get enough of her books. They're always epic, action-packed, fast paced thrill rides that are impossible to put down. I'm so excited for this one.