Review: Written in the Stars (Backroads Book 1) by Christina Coryell 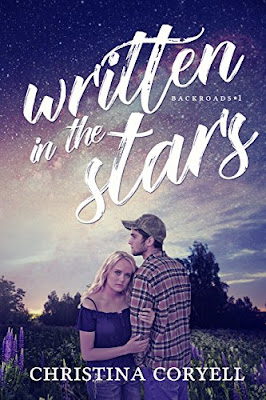 Roundabout these parts, dirt roads don’t just get you from point A to point B. They intersect to create a maze of life often missed when outsiders drive through a sleepy town. The number on the population sign might seem insignificant, but a few short steps from the beaten path, there’s more than meets the eye.


Look a little closer… That sleek out-of-town convertible is bringing former pageant queen Brooke Langdon back into town for the first time in a decade. She’s dragging nothing with her but the hyphen in her last name. Gatlin Moore is running his tractor along the fence line, spending his days keeping up his parents’ farm instead of living out his dreams in Nashville. The sheriff is pulling into Holly Christian’s driveway, preparing to tell her that her life’s about to crumble. And Hunter Pearce, the guy everyone calls when they need something fixed? He’s racing to Holly’s place too, wondering if things are too broken to put back together.

Welcome to Hope Canyon. This is our backroads story.

My first introduction to Christina Coryell was her novella, Mowed Over, in the Love at First Laugh box set. I was instantly charmed and knew I had to check out her other stories. And then, when I heard about her new novel I was doubly excited! I'm a big fan of books featuring life in small towns, so I couldn't wait to dive right into WRITTEN IN THE STARS.

I was captivated from the very first page. I was transported to the small town of Hope Canyon, Arkansas, feeling like a silent observer peeking into the lives of these authentic and complex characters. At times, it really did feel as though I was reading about real people in real-life situations. There was such an authentic feel to this novel. Coryell perfectly captured life in a small town where everybody knows everybody and everybody knows everybody else's business, where gossip spreads faster than you know it.

WRITTEN IN THE STARS was one of those books that I just wanted to savor, take my time with, stay with these characters as long as possible. But at the same time, I couldn't help myself but to read as fast as possible to see where the story led to next. And then, before I knew it, I had finished the book. :sad face: It was just so good! I didn't want it to end! Time flew by while I was reading. I became completely caught up in this book! I'd look up at the clock and be shocked by how much time had passed.

I could go on and on about how awesome WRITTEN IN THE STARS was and I seriously can't recommend it highly enough! Go grab a copy for yourself, you won't be sorry! Just be ready to get completely sucked into the lives of these down-to-earth characters! Can't wait for the next one!

I received a copy of this book from the author. All thoughts and comments are my honest opinion.

“If someone were to break in through the back door, her dog Skittles would destroy the place with his weak bladder. Not that a person would try to pull anything roundabout her neck of the woods, where everybody and their brother packed heat.”

“Is that your uppity way of sayin' you want to gossip? 'Cause that's actually frowned upon in these parts. Unless of course you frame your question with 'he needs prayer' at the end, and then you can gossip all you like. Form a chain if need be, so it spreads quicker.”

“She said that the stars are constant,” Holly continued. “No matter what's happenin' in our world, they're still there. The bright sun may hide them, or a dark cloud, but that doesn't mean they're gone. Tomorrow they'll be in the same place, waitin' for me to find them again.”

“Her spirit lifted a little, like the first small spark of a burgeoning fire that might one day turn into a full flame. And as she wondered if she should stir the embers a little, hope settled over her like a haze of smoke.”