Waiting on Wednesday: High as the Heavens by Kate Breslin

Waiting on Wednesday is a weekly meme hosted by Breaking the Spine that highlights upcoming eagerly anticipated releases.

This week I'm featuring High as the Heavens by Kate Breslin releasing June 6. 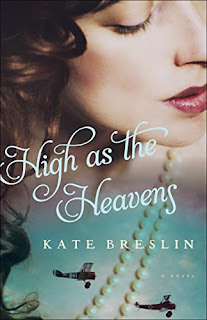 Page-Turning Intrigue and Romance from an Up-and-Coming Historical Romance Talent
In 1917, Evelyn Marche is just one of many women who has been widowed by the war. A British nurse trapped in German-occupied Brussels, she spends her days working at a hospital and her nights as a waitress in her aunt and uncle's café. Eve also has a carefully guarded secret keeping her in constant danger: She's a spy working for a Belgian resistance group in league with the British Secret Service.

When a British plane crashes in Brussels Park, Eve is the first to reach the downed plane and is shocked to discover she recognizes the badly injured pilot. British RFC Captain Simon Forrester is now a prisoner of war, and Eve knows he could be shot as a spy at any time. She risks her own life to hide him from the Germans, but as the danger mounts and the secrets between them grow, their chance of survival looks grim. And even if they do make it out alive, the truth of what lies between them may be more than any love can overcome.

Kate Breslin's first book For Such a Time was one of my favorite reads in 2014 (I still think about it today) and this new book sounds so good!  I haven't read as many World War I novels as I have World War II, so High as the Heavens sounds like a great one to add to my list!

What book are you waiting on?  Leave a comment below and let me know.